During it’s (so far) 80 year run, HLC branched into several other lines of Fiesta that were, in general, fired during their last five or six years of their vintage period.

Perhaps the most well-known of the offshoot Fiesta lines, Ironstone is generally considered part of the Fiesta color-line up. Ironstone was fired from 1969-1972. There were three colors in the firing, antique gold, mango red, and turf green, all meant to be modeled off of popular colors at the time.

Despite not holding the name Fiesta, several collectors still consider this as part of the Fiesta line, since many of the pieces are made from the same molds as regular Fiestaware. It was both introduced and retired in 1967. It comes in a brown glaze (somewhat similar to the post86 chocolate glaze, however there are differences in the shapes of the products) and some pieces have a black silk screen pattern on them.

Fiesta Casualstone was a similar product to Amberstone. It was produced in 1970, and was a gold color, similar to the antique gold Ironstone color. It, too, contained a silk screen pattern on several pieces, but it had a more delicate pattern than the Amberstone.

Fiesta Casuals came in two colors, blue and yellow. There were only eight different products, given teacup and saucer as one product.  They had a flower pattern were stenciled on the oval platter, the dinner plate, the salad plate, and the saucer. The solids were the nappies, the fruit bowl, the creamer, the sugar with lid, and the teacup. 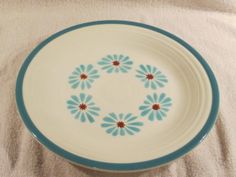 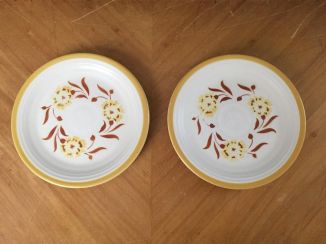 Fiesta Harmony line was, similarly to the Casuals line, a set of stenciled plates, cups, and bowls that were meant to pair well with the original six colors. HLC paired with the Nautilus line in 1936.

For two years, from 1954 to 1955, Fiesta produced calendar plates. These only came in light green, ivory, and yellow. 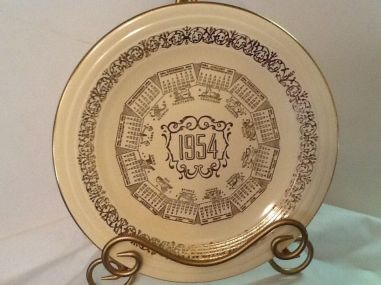 Fiesta Ensembles was when HLC began selling Fiesta in sets, similarly to what they do today, only they also sold them with glassware and flatware. This began in 1939. 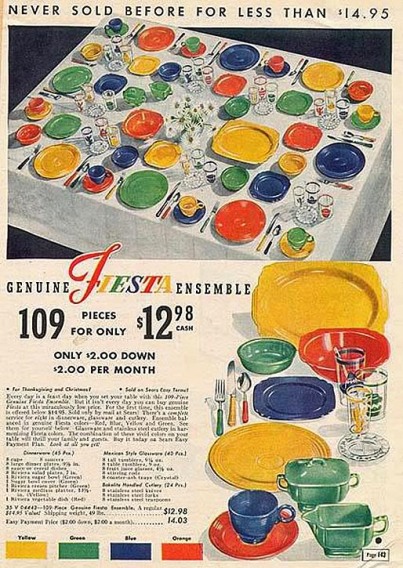 In 1935, some products were sold with decals, although these can be very hard to find, and most are like part of the other lines, and in the 30s and 40s, HLC sold striped Fiesta, in yellow and ivory, with red, green, or blue stripes.